The dissection of the sea urchins 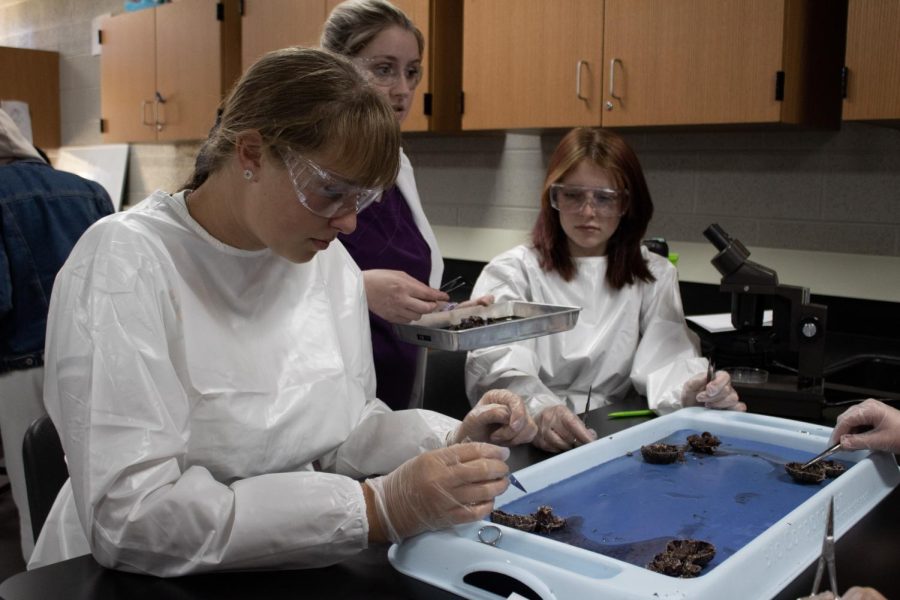 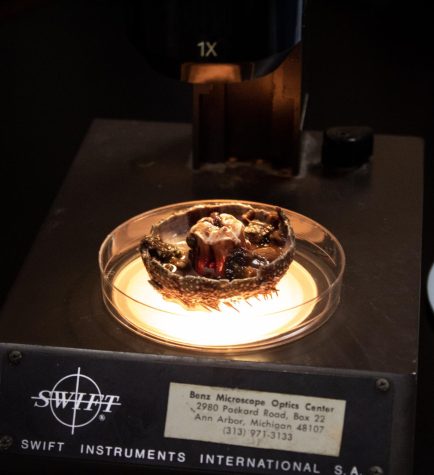 In Mrs. Fiero’s biology class, students dissected sea urchins to learn the difference between a plant and an animal.

Sea urchins are important because they play a critical role in the ecosystem by maintaining the balance of the coral and algae. Sea urchins are also a food source for otters, which is important because sea otters are critical to maintaining the balance of nearshore ecosystems, such as kelp forests, embayments, and estuaries. Without sea otters, sea urchins will take over kelp forests and other marine animals in the ecosystem will die along with sea urchins.

Half the students liked doing this lab and others didn’t. Before they cut the sea urchins open, Mrs. Fiero had them investigate what it looked like and had them draw a picture of the sea urchin and what they noticed. Grace Thorrez says, “It’s like a rock but it has pretty cool colors, but it does stink.”

As the sea urchin isn’t even cut open yet, we already have students around the class saying, “It smells so bad!” Pyper Norris said, “It smells disgusting,” but Toby Moore says that “it’s pretty cool, and it’s a lot more fun than classwork.” Many students said it was “gross”, but we also have students saying that the experiment is “cool.”

As the students start cutting open the sea urchins, the mood switches, and change their minds. We have more students now saying, “Ew what is that?” and, “I think I’m gonna throw up”. As it all happens, Mrs. Fiero enjoys watching the students “go through the gross factor,” but that’s not the main reason; she also loves seeing students that don’t work often “Become engaged in what we’re doing.” Doing labs like this can make students see their classmates differently by seeing them engaged in a hands-on project, as opposed to regular classwork.

After the lab, Mrs. Fiero had the students clean up, and as they did so, they talked about the sea urchins and what they thought about the lab as they experienced the process of dissecting. A lab like this puts a different perspective on what people think of sea urchins.